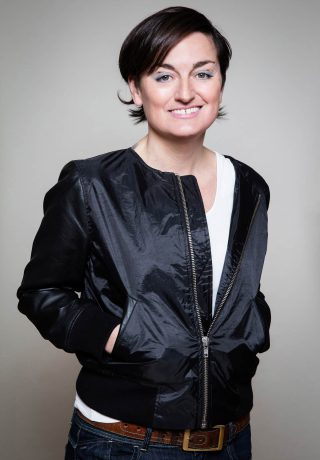 Always fizzling with indignation and throwing out a hugely enjoyable mix of brutal putdowns and richly funny stories, Lyons has what it takes to delight any crowd.

Probably the most impressive British female comic on the circuit.

In the African jungle the lion is king, in the Fringe comedy jungle Zoe Lyons is definitely a Queen, she’ll pounce on you with her witty repartee and have you rolling about the floor in fits of hysterics.

Zoe took her first steps on the comedy path after training as an actress at the Poor School in London.

She went on to win the Funny Women Competition in 2004 and her debut Edinburgh show was nominated for Best Newcomer, Edinburgh Comedy Awards. In 2008 she won Dave’s Funniest Joke of the Fringe Award.

Zoe’s trademark high energy, brilliantly observed routines and sharply written material has left her with an ever-growing fan base. She won both the Comedian’s Comedian Award and Chortle Award for stand up. Zoe’s debut hour at the Edinburgh Festival gained her a nomination for the Perrier Award, and she has hosted the prestigious So You Think You’re Funny Final in Edinburgh for the last few years.

Zoe is a familiar face on TV with credits including Have I Got News For You ( BBC1), Celebrity Masterchef (BBC2), Live at the Apollo (BBC2), The John Bishop Show (BBC1), Michael McIntyre’s Comedy Roadshow (BBC1), Dave’s One Night Stand (Dave), Alan Davies, As Yet Untitled (Dave), Pointless Celebrities (BBC1) and Don’t Sit In The Front Row (Sky Atlantic). She also regularly appears on Mock The Week (BBC2).

Radio credits include guest host of Radio 4’s The News Quiz, and a series regular on Just a Minute, The Unbelievable Truth and The Now Show. Zoe is also a regular on The Frank Skinner Show and The Jason Manford Show (Absolute).

Zoe has performed internationally including Australia, New Zealand, the Far East, The Middle East and all over Europe and she is a regular visitor to the Edinburgh Festival. In 2019 she starred in An Act Of God in London and received rave reviews.