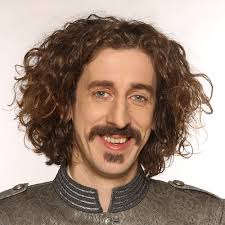 A rare talent, hysterical and accomplished.

The Gods of comedy chose Tom Wrigglesworth or greatness.

With a disarmingly charming delivery and unforgettable appearance, Yorkshire funny man Tom Wrigglesworth became a national have-a-go-hero when he rescued a little old lady from the jaws of a Virgin train ticket inspector; only to be arrested for begging.

His subsequent story of the event secured Tom several awards including the Chortle Best Show Award, and a nomination for the main Edinburgh Comedy Award.

Following this, Tom recorded two series of Tom Wrigglesworth’s Open Letters for BBC Radio 4, tackling consumer issues in his own hilarious way and winning a highly acclaimed Sony Award for Best Radio Comedy along the way.

As a natural and engaging television presenter, Tom put his technical background to use when he appeared on Electric Dreams (BBC 2), advising a modern family as they fast forwarded through three decades of technology. He then presented Engineering Giants (BBC 2), which saw Tom climbing aboard an oil platform, servicing a passenger ferry and dismantling a jumbo-jet whilst interviewing various engineers to keep the viewers informed as the three major strip downs unfolded.

Further television credits include being a regular contributor on The Discovery Channel where he explains the science behind crowd sourced stunts and experiments on the popular show You have been warned, the Edinburgh Comedy Fest Live, Russell Howard`s Good News and The Comedy Gala all for BBC Three as well as The World Stand`s Up, Edinburgh and Beyond and three series of The Comedy Store all for Comedy Central.

Since winning the Channel 4 new comedian competition So You Think You’re Funny in 2003, Tom is now firmly established as one of the most original, talented and respected comedians on the UK and International comedy circuit.

Tom is also a regular host of Radio 4`s Comedy Club, and has also guested on BBC Radio 4’s Loose Ends, Newsquiz, The Unbelievable Truth, The Now Show, Act Your Age, It’s Your Round, The Infinite Monkey Cage, You & Yours as well as BBC Radio 2’s Out To Lunch and Claudia Winkleman’s Arts Show. He has had regular guest performances on BBC 6’s Jon Richardson Show and has co-presented on Richard Bacon’s Radio 5 Show and The Rhod Gilbert Show on BBC Radio Wales.