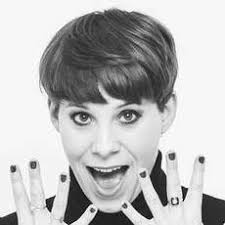 On the cusp of stardom. Ruffell really does have funny bones.

Classy stand-up from an emerging star.

Ruffell has nabbed the working class comedy crown for her  generation. Sparky, energising, fun, an accomplished act who  knows how to engage an audience.

Regarded as one of the best up-and-coming acts, Suzi won Best Club Comic at the 2019 Chortle Awards.

Her innovative style captivates audiences with her engrossing tales of social ineptitude as she celebrates her working class roots with a sideways look at the world.

It has been a busy few years for Suzi, with four sell-out runs at the Edinburgh Festival resulting in her recording her show Keeping It Classy for Live from the BBC with a clip racking up over 16 million views on Facebook.

Suzi has most recently appeared on Live at the Apollo, Mock the Week, Roast Battle, Ultimate Worrier, Hypothetical, 8 Out of 10 Cats, The Comedy Bus, Stand Up Central and Comedy Central at the Comedy Store.

Suzi is also a regular on BBC Radio 4 including The News Quiz and The Now Show, as well as co-hosting the hit podcast Like Minded Friends with Tom Allen.

Last year saw Suzi tour Australia as part of the Melbourne International Comedy Festival Roadshow followed by another sell out show in Edinburgh Dance Like Everyone Is Watching which was named as one of the top ten best reviewed shows at the festival.

She has recently added The Jonathan Ross Show, The One Show, House of Game and Harry Hill’s Clubnite amongst many others to her TV appearances and has many projects in television development including a sitcom and an entertainment show.