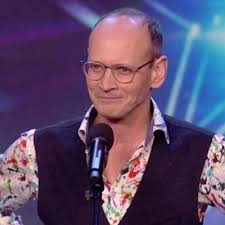 Dave Spikey (in his autobiography Under the Microscope)

The recent star of the show on Britain’s Got Talent, Steve is an actor, writer, comedian, juggler, and a Gillard Award winning presenter on BBC Radio Lancashire.

Steve most recently completed his 17th consecutive pantomime at The Grand Theatre, Blackpool (and his 22nd Pantomime in total) and was also made an honourary member of The Friends Of The Grand in 2016 for his services to the theatre.

In 2015 he performed 16 nights at The Manchester Arena as part of the Phoenix Nights Live show, and also appeared at the London Palladium twice within a month later that year when he performed as part of the TV show Sunday Night At The Palladium and as warm-up for One Night With Neil Diamond.

He spent many years as Special Guest on Dave Spikey’s Tours and has supported several other top comics including Peter Kay, Mick Miller, Roy Walker and The Lancashire Hotpots!

He is a regular headline act at all the major UK comedy venues and his TV credits include Phoenix Nights, Max And Paddy’s Road To Nowhere, Peter Kay’s Britain’s Got The Pop Factor, Stand-up Britain, Give Your Mate A Break, The Afternoon Show and Talk Of The North. He was also featured on the Granada Programme Behind The Scenes and That’s Entertainment (with Cannon and Ball) and was voted Entertainer of the Year at the inaugural Red Rose Awards.

For over 12 years Steve could be found in the guise of Mad Edgar the court jester at Camelot Theme Park where he presented over 2000 Crazy Juggling Shows.

Steve is also co-founder of the Slaughterhouse-Live (Laughter with an S) character comedy nights. They have taken the Edinburgh Festival Fringe by storm with sell out shows and rave reviews.