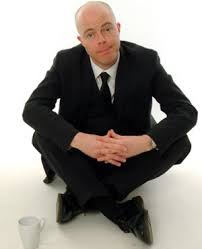 He is a gifted natural, with the years of experience to know how to handle a crowd, which goes to make him one of the consummate professionals of the stand-up circuit.

Highly regarded by his peers on the circuit - he's shaven-headed, topical, good, and nothing to do with Bob!

His laconic delivery shields an engaging persona and an enquiring mind.

Roger Monkhouse is one of the most original and distinctive acts on the comedy scene. A consummate stand-up who employs a deadly combination of charm and menace to exert a masterful control over any audience.

A highly original and quirky performer, Roger’s trademark stage-prowling style and curious, inimitable manner have established him as one of the hottest names on the comedy circuit.

He is one of the regular writers on Channel 4’s hugely popular comedy panel show 8 Out of 10 Cats responsible for scripting up-to-the-minute topical gags every week for the show which features Jimmy Carr.

Other television credits include appearances on The Comedy Store and The World Stands Up, (both Paramount), My God I’m My Dad (Bravo) and Street Cred Sudoku (UKG2).

A great topical writer and performer and master of sharp, observational comedy, Roger is a regular member of the prestigious and critically acclaimed Cutting Edge team at the London Comedy Store.

Roger is widely regarded as a master of observational comedy with routines that are unfailingly hysterical and his forte is delivering intelligent, thought-provoking material that pulls no punches and is always relevant and up-to-date.

Articulate, quick-witted and spontaneous, if something is in the news, Roger has a routine about it!