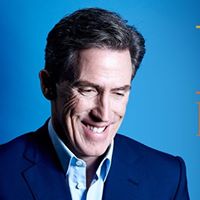 One of Britain’s finest all-round entertainers.

Rob Brydon is one of the UK’s top comedy actors, and is also a highly regarded radio and television presenter….as well as a singer and impressionist! A man of many roles, and a master of all of them!

Rob’s career began at Radio Wales at the age of 20 where he narrated many radio shows, adverts and animated films, as well as later appearing on television shows and films. His stand-up shows have been equally successful, with sold out shows around the UK.

Rob first came to the public’s attention in 2000 with the shows Marion and Geoff and Human Remains (co-written with Julia Davis) winning British Comedy Awards for both, but it was the hit romantic sitcom Gavin and Stacey, written by Ruth Jones and James Corden, that propelled him to stardom. In the show, he played Bryn West, a character that allowed him to return to his South Wales roots. Gavin & Stacey was acclaimed as a hit breakthrough show for BBC Three, becoming the Most Nominated Show in the 2007 British Comedy Awards.

Other TV and radio comedy credits include A Small Summer Party, The Keith Barret Show, Directors Commentary, Supernova, Cruise Of The Gods, Black Books, I’m Alan Partridge, Little Britain, Jack Dee Live At The Apollo, Rob Brydon’s Annually Retentive, The Big Fat Quiz Of The Year, Have I Got News For You and Just A Minute.

Rob’s talent for mimicry has often been displayed on the BBC Quiz Show QI, with rapid-fire impressions of Sir Alec Guinness, James Dean, Richard Burton and Sir Tom Jones, amongst many others.

Rob has always been hugely popular as a stand-up comedian. The DVD of his 2009/10 show, Rob Brydon: Live was a critically acclaimed best-seller. He has become a much sought-after television presenter and panelist in the UK and has long served as chairman of the comedy game I’m Sorry I Haven’t a Clue on BBC Radio 4 and since 2009 he has hosted BBC One’s Would I Lie to You?

In 2013, Rob was appointed a Member of the Order of the British Empire (MBE) for services to comedy and broadcasting, and for charitable services.