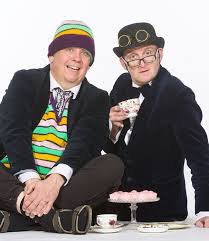 This is comedy that reminds us why we go out to see live shows.

A mad, anarchic triumph of stupidity over style. Not to be missed!

Together since 1992, the Raymond and Mr Timpkins Revue are a prop/music driven double act.

Their highly original performance approach has made them regulars in Universities and comedy clubs around the country, including appearances at Edinburgh Festival where they appeared in The Best of the Fringe, Glastonbury, Phoenix and Reading Festivals.

They have crisscrossed the planet in a bid to make money and amuse. From the Falkland Islands to Oman, South Africa to East Cheam, they’ve been there and enjoyed it all.

If you like to laugh and want something different, we recommend Raymond and Mr Timpkins!