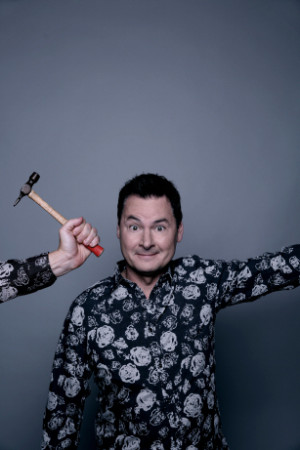 Material as up to date as tonights news.

The gags and observations keep on coming thick and fast. He can pretty much guarantee a good night out, Walker is crackingly good!

Phil Walker is one of those comedians who offers a little bit of something for everyone. His comedy style is relaxed, fun and easy to get into with his Northern banter and amusing anecdotes.

Phil started his career on the tough holiday park circuit working for the likes of Butlins. Then at the turn of the millennium he decided a change of direction was needed. Shortly after in 2002 at the famous Comedy Store in Manchester he was voted City Life Comedian of the Year, and he soon became part of the successful Men @ Work Improv Nights, and now headlines at most of the leading comedy clubs throughout the country and abroad.

He began presenting a family friendly show Phil Walker`s Comedy for Kids at Preston Guild Hall where he has a huge fan base through his recent Pantomime appearances and made his debut at the Edinburgh Festival in 2012 where he received four star critical acclaim for his show Is this it?

Phil is also proud to have entertained over 4000 troops on two tours of war torn Afghanistan as part of the CSE Comedy Club which he describes as, “I’ve played to some tough crowds in my time but they where never armed to the teeth with machine guns before, thank God they liked me!”

His act has become a firm favourite with the armed forces & has seen him touring places as far afield as The Falkland Islands, Kosovo, Kuwait, Bosnia & Germany, appearing with fellow comics as well as megastars including eighties icons Tony Hadley and Bucks Fizz.

Phil is also a star of Pantomime, notching up 18 productions to date. His latest show 2019/20 was in Darlington at the Hippodrome Theatre for top Panto producers Qdos winning 5 star reviews with critics & audiences alike.