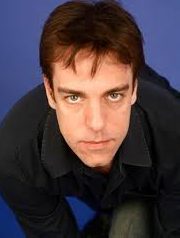 Some of the best political material I have heard in a while…comic genius.

I love Nick Doody...he's like a drunken, gagged-up Richard Dawkins, brilliantly shooting down superstitions with songs and sucker-punchlines!

Nick Doody is one of the brightest talents on the comedy circuit. Sharp and topical – he’s not afraid to say what he thinks; his brand of political comedy and satire has won him fans all over the country.

Nick’s career as a stand-up got off to a pretty good start, whilst still a student, Nick supported Bill Hicks on his final tour of the UK…Bill himself had requested Nick.

Since then Nick has been a finalist in Channel 4’s So You Think You’re Funny? competition and has performed all over the world. He was the first British comedian to perform in Croatia. Nick has appeared on various radio and TV shows and is also in great demand as a writer. He has written jokes for Joan Rivers, Lenny Henry, Dame Edna Everage and many Mock The Week regulars.

In 2006, Nick performed his first solo Edinburgh Festival show, Before He Kills Again. The show received rave reviews and sold out for the whole festival, leading to a run at the Soho Theatre. Nick has also written and performed another six solo hours of stand-up, including the most honest title ever to appear on a poster Look At This Massive Picture Of My Face.

Nick’s radio and TV credits as a performer include contributing to shows such as BBC2’s Comedy Map of Britain, ITV2’s Comedy Cuts, Radio 4’s 28 Acts in 28 Minutes, The Mark Thomas Comedy Project on Channel 4, Radio 4’s Political Animal and The Now Show, and BBC3’s Comic Side of 7 Days.

He was also the creator and head writer of Bigipedia, a critically acclaimed Radio 4 show that broadcast in 2009 and 2011.