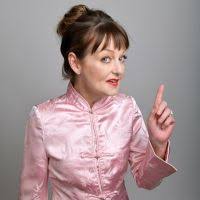 A stream of priceless one-liners.

Mandy Knight answers back, it's like Olive Oyl is an axe murderer!

Once described as “frisky as a terrier on heat”, Mandy Knight is a true dame of British stand-up comedy.

Outstanding in the field of stand-up, not just for wowing both domestic and international audiences, not just for being the first female to regularly compere at Jongleurs and The Comedy Store UK and not just for standing out in a male dominated industry… but because after 25 years of working every comedy circuit around the world, from Sidney to Sidmouth, Mandy is still as fresh and relevant as the day she stepped onto the stage.

After leaving drama school in the late 80s, she was soon regarded as one of the most exciting voices in spoken word and was being booked in venues up and down the country. With the ever expanding “Alternative” comedy circuit she quickly found herself performing on bills with these new-wave comics.

Her caustic humour made her stand out from the other female comics, and when the UK comedy explosion happened in the 90s Mandy was the act to book, not just for live work but television and radio. She could be regularly seen on all the then TV stand-up shows Live at Jongleurs, The World Stands Up, Live at the Comedy Store, Comedy Network, Comedy Blue, Melbourne Tonight and Australia’s biggest panel show Good News Week. Her comedy acting was called upon for sitcoms as well, performing in Baddiel’s Syndrome and Jo Brand’s Like It or Lump It.

In 2017 Mandy returned to the Edinburgh Festival Fringe after a twenty year hiatus, with a show that was simply her best work to date. The production, The Dark Knight, was a spectacular personal journey of discovery on why she has to make the unspeakable, hysterical.
​ ​​
Nobody is safe from her brutal wit…Mandy Knight remains one of the most respected and loved stand-ups in the business by both fellow comics, promoters and punters alike.