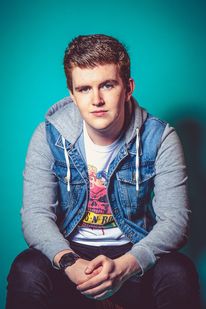 Frighteningly young first act Liam Farrelly is going to have to get used to the Kevin Bridges comparisons or have elocution lessons… it was apparent that this was a young man with natural storytelling talent… Impressive stuff that earned Farrelly the runner-up spot!

Beyond The Joke, 2018 Edinburgh Fringe Review: So You Think You’re Funny

Liam Farrelly is a 21-year-old up-and-coming Scottish comedian from Paisley, who started performing stand-up aged 17 whilst still in High School and who immediately went into comedy full-time after graduating.

A meteoric rise through the ranks has seen him nominated for and winning a raft of awards, have a guest acting role on BBC Scotland’s Scot Squad (S4E2, 2018) and perform at the UK’s best and most prestigious comedy clubs —all barely a year after first setting foot on a stage

After having dipped his toes into the Edinburgh Festival Fringe with a short set on a shared bill show in 2019, Liam’s plans to present his first hour-long show in 2020 were of course scuppered by the first-ever cancellation of the Fringe as a result of the global pandemic shutting down all live entertainment … but … by sheer luck with his timing, Liam had already established himself as a powerful live act, supporting artists such as Tom Stade and Larry Dean on tour, and being invited by Daniel Sloss to be part of his Work in Progress line-ups shortly before the lockdown.

Liam’s stand-up is story-based and his material is uniquely personal—you could say his unusual family have provided him with a goldmine, as his sister and an aunt are both nuns, he has a wheelchair bound parent with MS who has a wicked sense of self-deprecating humour, and other close relations are in various degrees of deterioration.

In 2021 BBC Scotland commissioned him to write and produce an episode of their Short Stuff.  Already a charismatic powerhouse on stage, Liam’s perfect timing and brilliant material is underpinned by a dry and understated delivery, flawlessly landing multiple punchlines with breathtaking ease.