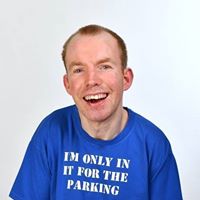 Lee Ridley aka Lost Voice Guy may not be able to talk, but he definitely has something to say, and his comedy will leave you speechless. Since making his first stand up performance, Lee has gained quite the reputation for being both very funny and very unique.

At the start of his comedy career he gigged across the country, performing at clubs and small venues and has been tour support for Jason Manford, Ross Noble, Patrick Kielty and Jason Cook.

In 2014 he won the BBC New Comedy Award, however he is best known for becoming the winner of ITV’s highest rated show, Britain’s Got Talent in 2018. He was the first comic ever to win the show. The Newcastle funnyman, whose cerebral palsy affects his ability to speak, uses a voice synthesiser for his act.

Lee’s other credits include his own sitcom Ability (BBC Radio 4), Live at the Apollo (BBC Two), The One Show (BBC One), Breakfast (BBC One), This Morning (ITV), Lorraine (ITV), Britain’s Got More Talent (ITV2), Voice Of The People (BBC Three), BBC At The Edinburgh Festivals (BBC iPlayer), America’s Got Talent: The Champions (NBC), I Just Called To Say… (Sky Arts), Comedy Central At The Comedy Store (Comedy Central UK) and the Last Leg (Channel 4).