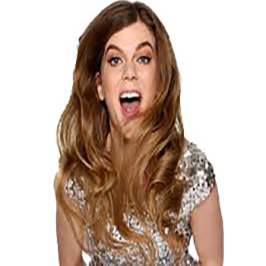 A star of the future … Lauren Pattison is set for fame.

Bold and bawdy ... a breath of feisty fresh air!

Bursting out of the North East, Lauren is a regular at all the major national comedy clubs and has provided tour support for Katherine Ryan, Jason Manford, Kerry Godliman, Stewart Francis and Dane Baptiste, as well as gracing the comedy stages of Latitude and Reading and Leeds Festivals.

In 2017, Lauren sold out her debut run at the Edinburgh Fringe Festival with her critically acclaimed show Lady Muck. On top of her Best Newcomer Nomination, Lauren won the prestigious Herald Angel Award and was nominated for Amused Moose Best Comedy Show. The 5-star show was the best-reviewed show at The Pleasance that year and was so popular that she added three extra sold-out shows. The success of the show saw it go on to a six-night sold-out run at London’s Soho Theatre, as well as runs at the Perth and Adelaide Fringe in Australia and the Auckland Comedy Festival in New Zealand.
​
In 2018, she was the only UK rising star invited to Just for Laughs Comedy Festival in Montreal, performing on the Brit(ish) lineup. Along with Montreal, she has performed at Adelaide, Perth, Melbourne, Sydney, New Zealand and Kilkenny International Comedy Festivals.