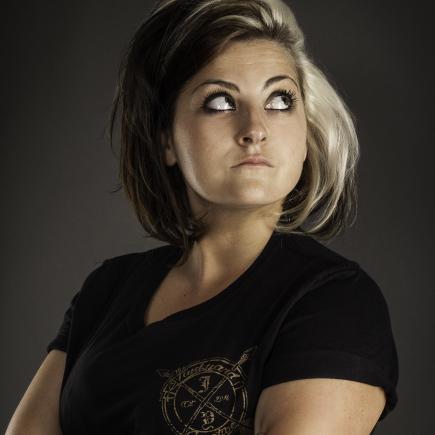 An increasingly impressive comic, making powerhouse standup from the thorniest of subjects.

Best described as ‘darkness wrapped in glitter’ as she delivers some brutal jokes with a disarming smile.

Welsh Comedian Kiri Pritchard-McLean is a double Chortle Award winning stand up comedian, writer and satirist. Recent television appearances include Live at the Apollo, Have I Got News For You, 8 Out of 10 Cats, The Russell Howard Hour (which she writes on) and she’s a frequent contributor on Frankie Boyle’s New World Order.

Kiri hosted both Stand Up at BBC Wales and Wales at the Edinburgh Fringe for the BBC. Other television appearances include Hypothetical, Would I Lie to You, Roast Battle and the Comedy Central Specials.

Every Friday during lockdown Kiri hosts Live from the Covid Arms, which has emerged top of the online comedy gigs during this period. It has been recognised by the Guinness Book of World Records as the world’s largest online pub; it had 6,215 visitors to it’s online quiz. The Covid Arms has also raised £72,632 for food banks and The Trussell Trust.

A regular on BBC radio, Kiri is the current host of Newsjack and has appeared many times on The Now Show and the News Quiz. She often co-hosts on Rhod Gilbert’s radio show and guest hosted Newsjack Extra.

A regular on the live circuit, Kiri took her recent show Victim, Complex to Edinburgh recently where it was a sell out smash hit, and will tour the UK shortly with her new show Empathy Pains.

Kiri is a co-creator and co-host of both the All Killa No Filla podcast and the live juggernaut Amusical. All Killa No Filla is a podcast about serial killers that has a gigantic following worldwide. Co hosted with Rachel Fairburn, the podcast’s live adaptation sold out The Leicester Square Theatre in minutes and toured the United States. Amusical is a phenomena that started in Backyard Comedy and has run monthly for around two years. Comedians sing their favourite songs from the musicals, hosted by Kiri with Jayde Adams and house band Dave and the Quavers. In the short time since it’s conception it has sold out the Pleasance Grand in Edinburgh three times and been made into a pilot with Burning Bright for Comedy Central.