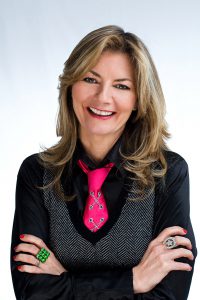 Quite simply, a damn funny woman.

One of the finest female comics at work.

I never knew I could like a woman so much – I’m ashamed to say she did make me wet myself!

Jo was born in Wales to Irish parents and brought up in Derbyshire, Nottinghamshire and Leicestershire and she now lives in Scotland.

Whether you’ve seen her on TV shows such as Have I Got News For You or Michael McIntyre’s Comedy Roadshow, heard her on the radio on Just a Minute or Stop The Press, or caught her live at one of her award-winning Edinburgh Festival shows, the chances are you’re already familiar with Jo’s work.

Jo can regularly be seen headlining the UK’s biggest and best comedy clubs. She is also in high demand on the corporate circuit, speaking at and hosting dinners and award ceremonies for many leading companies across the UK and beyond.

Behind the scenes Jo is a respected writer, having served as a writer / programme consultant on all five series of Graham Norton’s BAFTA Award winning So Graham Norton and as head writer on both Ruby Wax’s Waiting Game and Zoe Ball’s Strictly Dance Fever. Jo has also written for – among others – Joan Rivers, Ant & Dec and Anne Robinson.

Jo wrote and starred in 3 series of her own critically acclaimed Radio 4 comedy show, It’s That Jo Caulfield Again, and her quick wit has led to her being in demand as a guest on a huge variety of radio shows including The News Quiz (Radio 4), Armando Iannucci’s Charm Offensive (Radio 4), The Steve Wright Show (Radio 2), The Now Show (Radio 4) and The Unbelievable Truth with David Mitchell (Radio 4).

In 2018 she won the SGFringe Stand-Up Comedy Award and gained critical acclaim for her performance as Helena Brandt in the sell-out Fringe run of the play, Brexit.