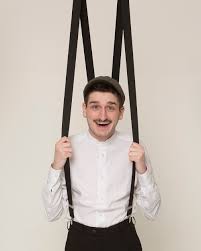 Award-winning, stand-up comedian and Hull local, Jack Gleadow, is one of the most unique performers on the UK comedy circuit today. He takes his inspiration from the golden era of variety; Jack is the One-Man Variety Show with the use of sounds, stories, jokes and a scooter and has got off to a good start by already performing for Harry Hill!

In the words of Leicester Comedy Festival, after winning the prestigious 2018 Leicester Mercury Comedian of The Year award, “Jack bowled over the judges with his quirky set; a delightful blend of audience participation, wordplay and physical comedy.”

Jack is in huge demand on the live comedy scene. All well as performing across the top UK comedy clubs, Jack has been featured on the comedy stages at various festivals such as Latitude and Glastonbury and has also provided tour support for Lloyd Griffiths. Jack took his debut solo show Mr Saturday Night to The Edinburgh Festival in 2019 which received 4 and 5 star reviews. This is after also performing as part of the prestigious Pleasance Comedy Reserve, now in it’s 14th year.

Having recently graduated from Salford with a First in a BA in Radio & Television, Jack has a keen interest in presenting. Even at such a young age, Jack has extensive experience working in a professional studio environment. He has fronted commercial and promotional videos for various several indie production companies and festivals as well as hosting live events such as comedy gala shows, alongside the likes of Reginald D Hunter, Joe Lycett, Russell Kane, Sean Walsh and Miles Jupp.