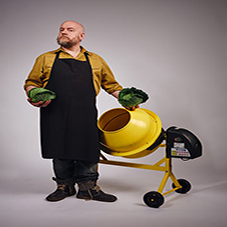 Trust us, you won't believe how good the food is

Dissatisfied with the quality and the price of room-service food while touring the stand-up comedy clubs of the UK, George embarked on a project to convert the provided equipment in a hotel room (the kettle, iron, trouser-press, hairdryer, mini-bar, and so on) into a working kitchen with impressive results.

His one-man show George Egg: Anarchist Cook premiered at the Brighton Fringe 2014. It was a total sellout and was nominated for Best Comedy Show in the Festival and Fringe Awards. This was followed in 2017 with his second show George Egg:DIY Chef – a guide on how to cook in a shed with power tools. 2019 saw a return to the Edinburgh Festival Fringe with his third sell-out show George Egg:Movable Feast, his new show about making food on the move.

A stand-up comedian for the last two decades, George has toured extensively in the UK and internationally and has supported Lee Mack, Micky Flanagan and Jack Dee on major tours.