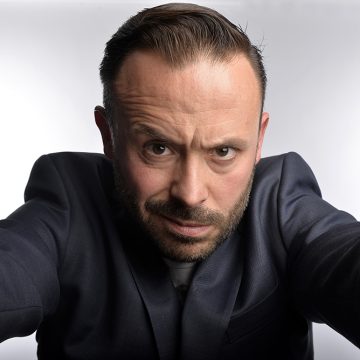 On the comedy circuit Norcott is an absolute tonic.

Norcott is an out and out rebel.

He’s a class act with a mature, sharp take on modern politics.

Geoff Norcott is a unique voice in British comedy.

Having appeared on Live at the Apollo (BBC 2) Mock the Week (BBC 2) The Last Leg (C4) Would I Lie to You (BBC 1) and Question Time (BBC 1) he’s built up a significant live following with sell-out Edinburgh runs and two national tours. Operating outside the usual comedic commentary on politics and social issues, Geoff has carved a real niche for himself.

His career has been snowballing since a successful Edinburgh Fringe in 2016 with his show Conswervative, which was followed by several successful national stand-up tours, with the latest, Taking Liberties in 2019 and extending into 2020 by popular demand.

Being a rare stand-up who leans to the right, Geoff has also found himself in demand as a social commentator on shows like Daily Politics (BBC 1), All Out Politics (Sky News) and Victoria Derbyshire (BBC 2). In this capacity, he’s also been popping up on the radio with his own BBC Radio 4 specials Withdrawal Disagreement and Right Leaning but Well Meaning as well as discussing comedy and politics on Loose Ends(R4), Today (R4) and Good Week, Bad Week (5Live).

His satirical comment has found its way into national publications with articles appearing in The Sunday Telegraph, The Independent and The New Statesman, and Geoff remains in high demand as a writer for TV too, with an impressive list of credits, including: Alternative Election (C4), 8 Out of 10 Cats (C4), The Sarah Millican Television Programme (BBC 2), A League of Their Own (Sky 1), Xmas Live at the Apollo (BBC 2), Katherine Ryan In Ireland (Sky Arts), and 8 Out of 10 Cats Does Countdown (C4).

Geoff’s awards include a nomination for Best New Show at the Leicester Comedy Festival and an Operational Services Medal for five frontline tours entertaining the troops in Afghanistan.