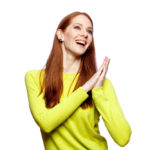 Her wacky and irreverent storytelling will charm, shock and uplift you. Not for the fainthearted, but also not to be missed.

She is a flame-haired, filth-firing force of nature, tossing the audience from open-mouthed incredulity to tear-filled guffaws.

Diane Spencer is an award-winning UK based comedian, who has been delighting audiences with her cheeky, dark and delightfully filthy humour.  With over 35K subscribers on YouTube and over 6 million views, Diane’s hilarious comedy is appealing to people worldwide.

Starting in November 2006, Diane quickly showed promise as a comedian, being a highly commended finalist in the Raw Comedy Quest competition 2007.  Although British born, Diane was living in New Zealand at the time, and began shaping her comedy skills in Auckland, eventually being nominated for Best Female Comedian by the NZ Comedy Guild in 2009, notably for her solo hour Wit, Charm and Filth (2009).   Before emigrating back to the UK, Diane wrote an entire new hour long stand-up show called Lost in the Mouth Specific  and it was this show that enabled Diane to break into the UK comedy circuit.

A dazzling performer, Diane captivates the crowd with her charming demeanour, cutting wit and skilfully crafted material and has recently been tour support for Jason Manford on his 2022 Like Me tour.

Diane draws inspiration from her own life and social concerns, and in total has written 8 stand-up comedy shows, each critically acclaimed and available to watch on Youtube.  Producing her comedy content and directly uploading it to YouTube has enabled Diane’s comedy scope to encompass the globe and bring smiles to people wherever they are.