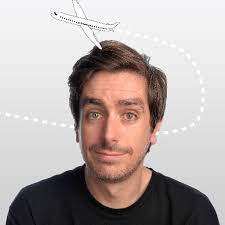 Spot-on comic timing and really imaginative use of special effects

A tall guy with a big talent for short jokes

Having worked as an illustrator, animator and short-film maker, life-long Monty Python nerd and official giant, Darren Walsh decided to try his hand at Stand-up in 2010 using props and and strange sound effects he’d made in his bedroom.

A year after starting Darren received the bronze medal at the Laughing Horse New Act Of The Year. In 2012 he was listed in Timeout’s printed edition as One to Watch, later that year going on to win the 2012 Luton Comedian Of The Year.

In 2013 Darren was again awarded a bronze medal at the NATYs, and then later that year won the very first Comedy Knights Fresh Comedian Of The Year.

In 2014 Darren became the UK’s first Pun Champion, which led to a book deal with the UK’s biggest publisher Random House/Penguin. Cheep Laughs features over 1000 of his cartoons and gags.

Later that year Darren flew to Texas to compete in the World Pun Championships, dressed as a chicken and baffling the locals with his strange British accent.

In 2015 Darren took his debut hour show to the Fringe and was listed by Timeout as their Top 12 Newcomers to see that year. He was also invited by the BBC to perform as part of their BBC Presents’ Showcase. His show Punderbolt made the top 10 joke list’s of the Guardian, Telegraph, Mirror and Independent before finally going on to win Dave’s Funniest Joke Of The Fringe.

Towards the end of 2015 Darren created the London Punderground which went viral on social media, he was also asked by the Metro to review Gold’s cracker joke entries.

In 2016 he was asked by Dave’s Leicester Comedy Festival to help them promote their new UK Pun Day Initiative, appearing on various BBC Radio stations.

IN 2018 he performed his 3rd show Massive Punt at the Edinburgh Fringe where he took audiences on a round-the-world flight, closely followed by his 4th show Punimal Farm to great reviews.

Darren recently appeared on Out There (ITV) a new pilot format which lifts comics out of the comedy club and plonks them in real-life situations.