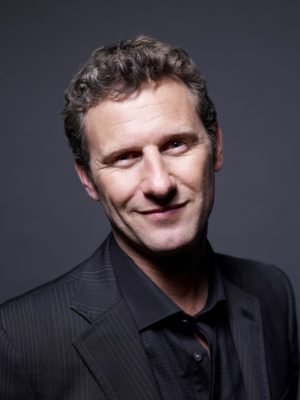 Hills delivers stand up so effortlessly brilliant you wonder why some comedians even get out of bed.

One of the biggest stars in Australia, Adam Hills has become one of the most popular comedians in the UK, with 16 solo shows that have toured internationally. His combination of positive, uplifting comedy and rampant spontaneity has seen him receive a host of awards, glowing reviews and a legion of fans around the planet.

Dubbed as the nicest guy in comedy, when he is not conquering the small screen he is treading the boards as one of our finest stand-up comedians, selling out rooms around the country and around the world.

Adam is a host of Channel 4’s critically acclaimed entertainment show, The Last Leg, which has won Broadcast and RTS Awards. Adam was also the host of the Australian hit show Spicks and Specks which ran for 277 episodes, as well as his own Australian talk show, Adam Hills Tonight.

Adam’s solo shows are established highlights at the Adelaide Fringe, the Melbourne Comedy Festival, and the Edinburgh Fringe – where he regularly sells over 10,000 tickets in the month.

He is the only Australian comedian to have performed at the US Comedy Arts Festival in Aspen, and is a regular star of the Cat Laughs Kilkenny Comedy Festival in Ireland, and The Just For Laughs Festival in Montreal. He toured the UK with his show Clown Heart which was also recorded for DVD at Hammersmith Apollo. His first book Best Foot Forward was published in 2018.

Adam’s other UK TV appearances include Mock The Week, The Charlotte Church Show and Never Mind The Buzzcocks, as well as having his own half-hour special on The Paramount Comedy Channel. He hosted two series of Four At The Store for BBC Radio 4, and co-presented We Say Tomay-to on Radio 2.